This is where you’ll find posts that tell you about imortant changes to the site and the latest new stories and chapters that have been posted. For a full history of story chapters by when they were added, see Update History.

The year 2019 is at an end. Let us rejoice. It’s incumbent on every website and video channel to do end-of-year rundowns, of course, and we here at Alternative Gay Erotica R Us will not disappoint. I’ll admit I was immensely curious, even more than last year, to see what stories would end up on the 2019 most-viewed and highest-rated lists. Below, I’ve assembled two Top 50 lists of stories on the site in 2019 ranked by popularity and by votes.

It’s been a fun year in BRKland. I continue to be proud of the writing I’ve done, and the site has attracted several talented new contributors willing to share their deliciously prurient imaginings alongside the veteran writers who’ve graced our site for years. The site continues to grow steadily. 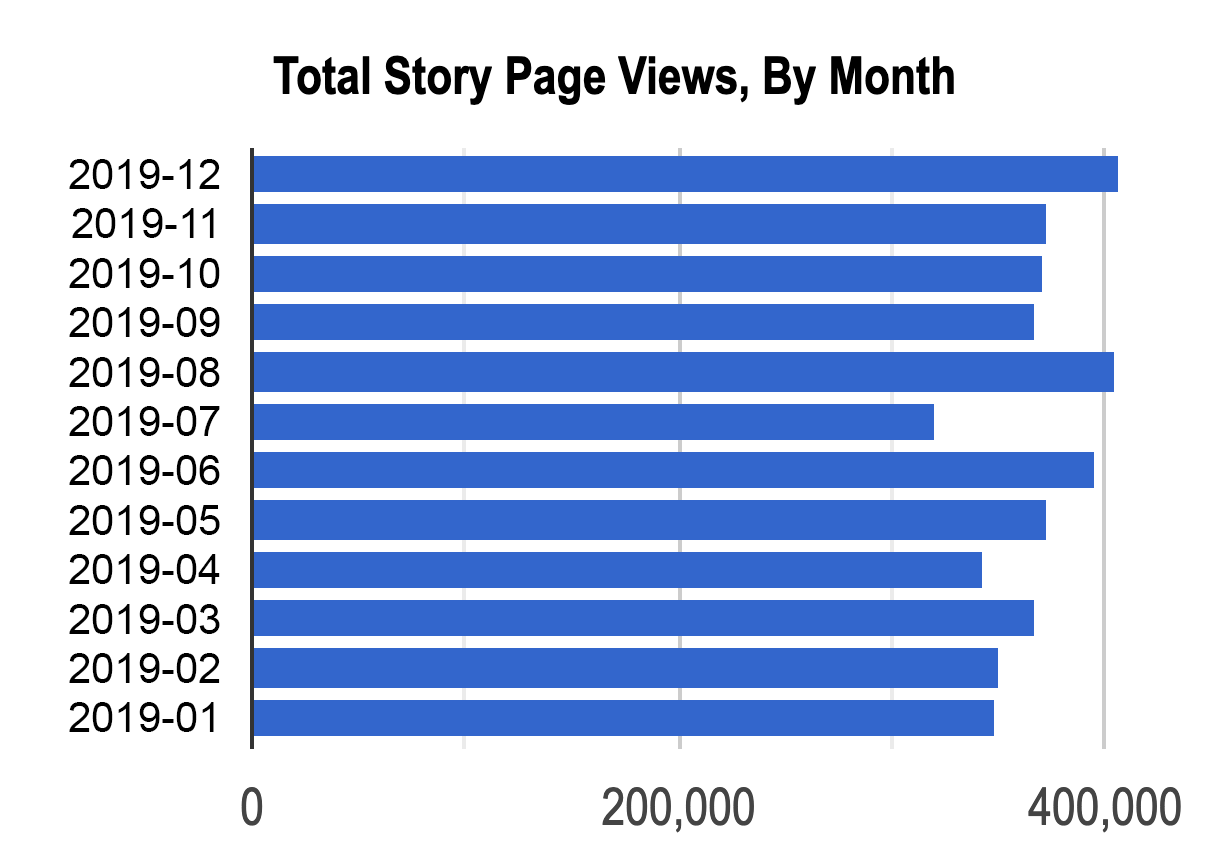 In August 2019 the total story page views per month passed 400,000 for the first time, and again in December—twice where we were at the beginning of 2018. That’s counting views on the story pages only, with a limit of one view per page per session per IP address. Total words added to the site in 2019: 1.7 million (15% of them mine), up from 1.3 million in 2018. The site now hosts 4,431 chapters across 1,441 stories. (More site statistics can be seen here.) Also in September I passed a personal milestone: with some amazement I calculated that I had just passed 1.5 million words writing as BRK since 1997.

For this year’s lists I’ve used the same methodology as before. The outcome on both lists is a great mix of different kinds of stories, reflecting a diversity of tastes, tones, genres, and interests. I’m also pleased that both lists boast several authors new to the site alongside the steady contributors with more familiar handles. There are even a few authors on the lists who’d shared stories with us before and returned this year after a long gap. As I said last year, though Metabods remains, from my point of view, first and foremost an outlet for my own writing, it will always mean a great deal to me to be able to provide a safe place for stories about men who exceed the confines of mundane reality.

With the most popular list, I wanted to show which stories were popular with lots of readers, so while I ranked the stories by page view count per story in 2019 I also factored in the diversity of IP addresses to a small extent so that high page views come from primarily from the same happy visitors gave some ground to stories that pleased a lot of people. This should result in a list that more directly shows actual popularity with site visitors as a whole this year. IP addresses that were banned for abuse of the star rating system were excluded.

As I noted last year, my own showing on this list is partly the ironic result of my being the site’s most prolific contributor. Most authors write a small number of stories and keep adding chapters to them, piling their view counts onto a limited number of story titles. This year I wrote 62 chapters across 31 stories, 19 of them new. (Last year it was 56 chapters over 37 stories, 10 new, so I’ve written more, but slacked in my general resolution to continue old stories rather than starting new ones—though to be fair I did a pile of vignettes in June, and I had a few new commissions this year. My wordcount this year was 254,893, down 13k from 2018 but consistent with what I’ve been writing from 2017 on; the previous four years I was closer to 100k a year, and less before that.)

So my views are a lot more spread out than those of the other authors on the site. (If you’re wondering, my stories get about 11-12% of the site views every year.) I am happy to see “Touch” on the list—it’s one of my favorites out of my recent efforts, and I’ll definitely be returning to it very soon.

For the highest-rated list, I combined the average star ranking for votes cast in 2019 in a weighted formula with the number of votes, to reward the stories that have attracted a large number of positive votes. Again, banned IP addresses were excluded, as were stories with 5 or fewer votes in 2019.

In the list below, the stars reflect only 2019 votes.

Explore the lists, browse the site, search for what you like by tag and keyword, and don’t forget to upvote and comment on your favorite stories—it really does help the authors.

I hope for, and wish you all, a safe and happy 2020. The next update will be on 11 January. In the meantime, thanks for visiting and enjoy the site!