“Well, what are we going to do?” asked Coach Winstrom. “We’ve got to finish the season, and the athletes can’t go down on the mat with those big boobs. We’re going to have to hide them somehow.”

“We’ll need a new kind of singlet that covers up the boys’ full upper bodies,” said Coach Sergio. “Then we’ll have to strap their pecs in with support harnesses. Hopefully their boobs won’t show too much and we can get through the season without having this come out into the open, which would be very embarrassing.”

“Where will we get the support harnesses?” asked Coach Andy with interest. He was picturing all the athletes walking around in form-fitting pectoral garments. Ever since the athletes had grown giant pecs from the overdose of Mega Pecs Maker, Coach Andy spent day and night with the team. 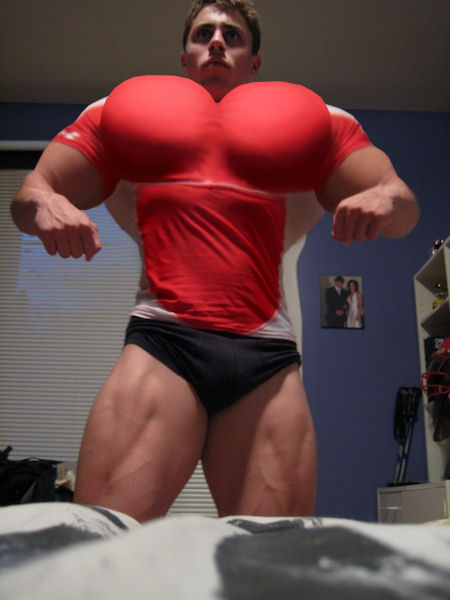 Overdosed athlete, by Dr. Randy (Click to enlarge)
“Well, I’ve contacted Sports Clothing, Inc,” responded Coach Winstrom. “They’re definitely going to make us full body singlets to hide the athletes’ pecs. Let me call them back and see if they can put together a design for the support harnesses. We’ll have to get a measurement on each of the boys.”

“I’ll take that responsibility,” said Coach Andy. “I’ll get that done for you after today’s practice.”

Practice that day turned out to be a challenge as the athletes tried to adjust to their new top-heavy dimensions.

Josh ran up to Coach Sergio. “Bruce is feeling me when we’re on the mat,” screamed Josh. “Tell him to take his hands off my….. off my pecs!”

“Bruce, have you been doing it again?” asked Coach Sergio. “That’s the third player who’s complained about you.”

“I can’t help myself, Coach,” said Bruce. “Josh is next biggest after me. We’ve both got bigger boobs than my girlfriend has, and I can’t help thinking about her when I’m tackling Josh. Speaking of gigantic size, look at the size of my boobs, Coach Sergio!” And Bruce started posing his huge tits in the mirror for himself and for Coach Sergio.

“Stop that right now!” shouted Coach Sergio. But meanwhile Coaches Andy and Brad had rushed over and were watching Bruce pose his big boobs in the mirror.

“He’s definitely the biggest on the team,” whispered Coach Andy to Coach Brad. “And he sure likes to show them off. When we get the chance, let’s give him some more Mega Pecs Maker. There’s plenty more in the storage closet.

“Yeahh, dude!” said Coach Brad. “I’d like to pour it into him and watch his pecs explode right in front of our eyes! And knowing Bruce, he’ll definitely want to pose those big balloons in the mirror for us.”

“Watch it, Coach. You’re springing a boner. You don’t want Sergio or Winstrom to see that.”

“That gives me an idea,” said Coach Andy. “Let’s feed ALL the boys more Mega Pecs Maker right before we take their measurements.”

But first they needed to get Coaches Winstrom and Sergio to leave the locker room so they could have the athletes to themselves. “OK, Coach Sergio,” said Coach Andy, addressing Sergio and Winstrom. “You and Winstrom can leave everything up to us. We’ll take over from here. We’ll get the measurements the clothing company needs.”

“Oh, we’re going to get measured?” asked Bruce, as Sergio and Winstrom left the gym. “Can I have some more Mega Pecs Maker before you take my measurements?”

“What, those boobs aren’t big enough for you yet, Bruce?” said Brad.

“Well, I would like them bigger. You know me. I like ’em HUGE. And I love showing ’em off in the mirrors. You know how well that stuff works on me.”

“Not right now, Bruce. We’ve got to take care of the full team. Would you like to see some of your buddies get bigger.”

“Yes sir, Coach, I sure would”

“OK boys”, yelled out Coach Andy. “You all need to strip down and take a shower. Then line up over here. Most important, you guys need to drink lots and lots of this solution we’re giving you in order for you to stay properly hydrated for the measurements.”

“Properly hydrated for the measurements? asked Bruce with a smirk. “I know what you guys are up to. I know what that solution actually is. You pec freaks want to see us get bigger, not smaller. I’m going to tell Sergio and Winstrom”

“No, you’re not,” said Coach Andy. “You want to see everybody grow just as much as we do.”

“Yeah, you got that right,” yelled Bruce. “Look at me guzzling the Mega Pecs Maker! Yeah, Coaches! Look at my big boobs expanding. I can’t wait to see all the other guys blow up too. Then turning to Josh, “Josh, make sure you drink a lot of this stuff! They need you to be hydrated for your measurement, Josh”

“Leave me alone,” said Josh, trying to cover up his gigantic tits which Bruce was staring at. 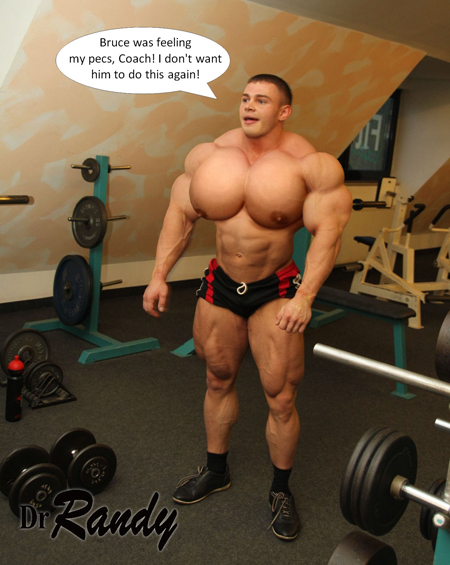 Josh: pectoral overdose, by Dr. Randy (Click to enlarge)
As the boys were all stripping down and drinking the Mega Pecs Maker (unaware of what they were drinking except for Bruce), their pecs started blowing up like gigantic stripper boobs. Several of the athletes got hard-ons. Bruce was fully stimulated, and he stepped into a corner of the locker room in order to feel himself up. Coach Brad saw Bruce over in the corner and approached him. He stopped and watched as Bruce felt himself up.

“Oh, Bruce, those are beautiful,” said Brad. “Look at them growing as you work ’em.”

“Do you want to feel them?” said Bruce.

“Well, actually I do. But let’s wait for the fitting. I’ll make sure I’m the one who takes your measurements and—because you’re so large, we’ll step away to a more private area so we can take the time to get you an accurate fitting.”

When Bruce walked back toward the center of the locker room, Josh yelled out, “Look, Coach Andy. Bruce has a hard-on. He’s been over there feeling his own tits. That proves my point. He’s a sick tit freak!” But meanwhile Coach Andy and Coach Brad were trying to hide their own hard-ons. 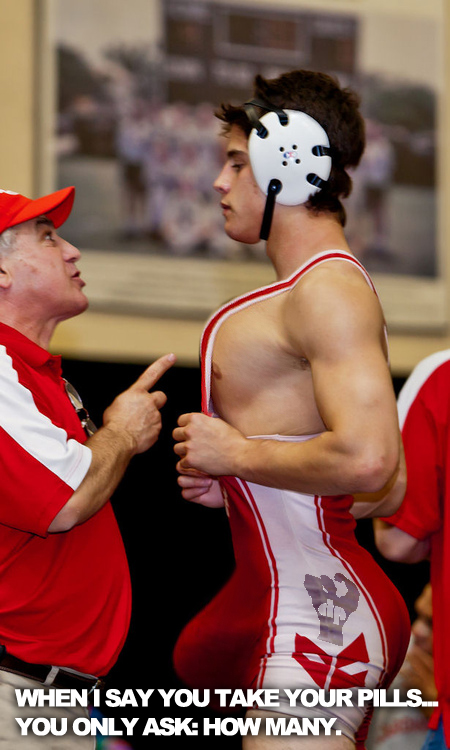 MEGA PECS MAKER, VERSION 2—Flexible enhancement for desired sites of impact Accommodates specific coach fetishes and team growth directives. Image by DPhenix (Click to enlarge)
“Boys, we’re going to measure you one by one. Come over here by the mirrors. You’ve really got to stick them out for a proper circumference. Show ’em off in the mirrors and we’ll work on getting a full circumference on ’em. Here’s some additional Mega Pecs—I mean some additional water to drink. As we said, everyone needs to be fully hydrated. Drink up, boys! Stick ’em out! Yeahhh! Stick ’em way out for an accurate measurement!”

“Oh yeahh!” yelled the coaches. God, that’s beautiful to watch the team pump their boobs out for the pleasure of their coaches.”

“Josh,” yelled Coach Andy. “Don’t stand there all hang-dog. You’ve got the best physique of all the wrestlers. Make the best of it. Stick that huge chest out proud for your measurements.”

“Really, Coach? You like my physique? Well, I do want to do what’s best for the team, Coach.” And then Josh extended his beautiful boobs forward for a full-cirmcumference measurement by Coach Andy.